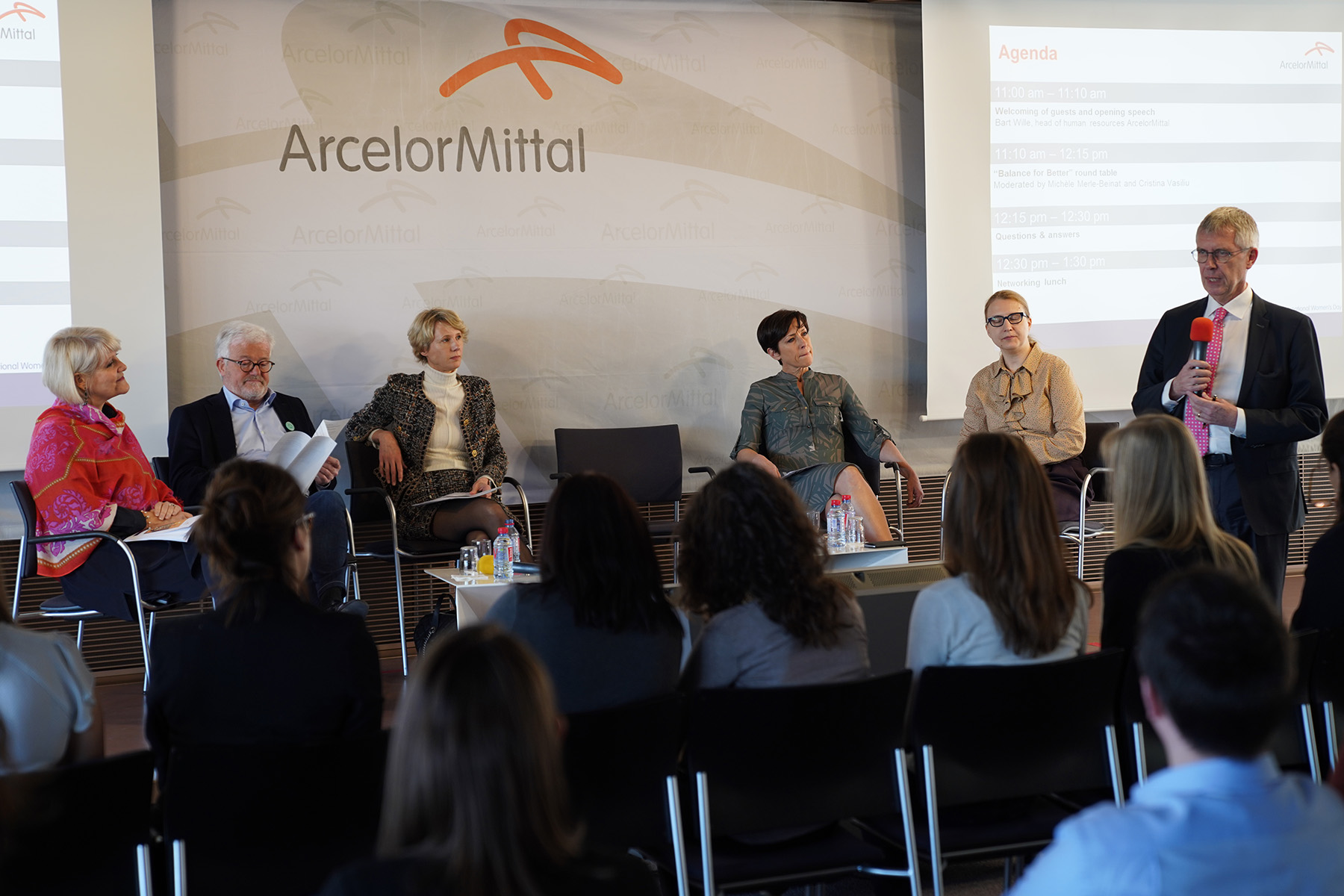 Celebrating the International Women’s Day (IWD), a panel discussion was organized at the ArcelorMittal HQ in Luxembourg focused on the 2019 theme: “Balance for Better”.

Luxembourgish gender equality experts were gathered to discuss about the women in the workplace and shared their thoughts about how to give more empowerment to women.

ArcelorMittal is one of the 230 companies selected for the 2019 Bloomberg Gender-Equality Index (GEI), which distinguishes companies committed to transparency in gender reporting and advancing women’s equality in the workplace.

ArcelorMittal Luxembourg needs to boost its attractiveness to young generation, women, high skilled graduates, engineers and technicians as well as offering career perspectives within its own organization.

How can we raise awareness and create a wide gender equality strategy?

According to the Eurostat study 2019, women in Luxembourg are less represented in managerial positions and are earning less money than men with the same job description, same years of service and same skills in general. Women are even more in part-time than men, increasing the gender gap in the workplace.

Awareness of gender equality has to be built when you are child:

Raymond Schadeck explained that the association Da Vinci, gathering engineers and architects, organizes workshops with children around 6 years old. At that age, girls and boys were half and half. Da Vinci makes the same workshops with older children, around 10 years old, and the association found out that girls were represented only by 10%. So, the unconscious gender biased is normalized between those two ages, 6 and 10, when education provided by family and school is defining your future stereotypes.

Does a difference exist between man and woman leadership?

Common thoughts pretend women are more sensitive than men in their leadership. Women of the current generation of managers had to fight for their credibility in a work full of responsibility. As an example, provided by Isabelle Lebbe, partner at Arendt&Merdernach: “when I was young, we had a meeting with lawyers. All men were looking at me waiting for their coffee. They never had their coffee.” By this experience, she expressed the treatment reserved to women who are working in a male stereotyped business. Fighting these stereotypes is also saying ‘no’ to the tasks they considered as women things, like making or serving coffee!

The older generation thought it was natural for a woman to stay home to take care of children while the husband was earning money for the whole family. Those times, women had to prove their commitment to their job and their company, but they also had to build a wall between their family life and career, to not let their female position interfere in their ambition.

Communication is now the most important thing when you need to conciliate a career and a family life. Indeed, Mrs. Lebbe informed her working partner about her organization, reserved some lunch in the working week and diners only for family, “As soon as you communicate on it, everyone accepts it.”.

What about “Balance for Better”?

Each year, the 8th of March is celebrated as the International Women’s Day and in 2019 Women’s Day organization puts forward the fact that a fair world needs to be gender-balanced -when everyone got the same opportunity in some countries in the world. Other countries, as Luxembourg, represented as advanced still have some efforts to do regarding the gender equality on the workplace. Hiring women in gender-biased industries will make little girls more interested in those careers. The aim is to increase the number of girls in STEM studies and the next generation will present a better-balanced workplace. At the beginning of the session, our moderator Michèle Merle asked the audience to give the name of only one woman known as a famous metallurgist. As you can guess, nobody could answer. This is where gender-balance wants to conduct us, to an industry with its female inventors.

The discussion panel concluded by the importance to highlight the need of gender-balance and women’s rights, but one day per year, the 8 march, is not enough. Panelists believe that women inclusion should be an everyday battle.

Education remains the key of a better-balanced world. They wanted to encourage parents and future parents in the audience, men and women, to educate their children without regarding their gender. But fathers need to be educated too! Indeed, Fabienne Dasnoy highlighted that if women have family life, men also. Parity begins at the heart of the family, where both parents have to involve themselves in their everyday life.

After the round table, speakers and attendees could have a networking lunch together to share about their thoughts and experiences. They also participated a women’s day special photo booth, organized by ArcelorMittal Flat Europe HR team, to show their statements for women’s rights and gender equality.

Please stay tuned for further information on our twitter page.