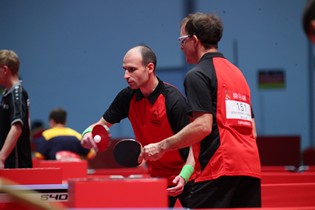 In early 2019, Luxembourg athletes like no other competed in the Special Olympics in Abu Dhabi.

A year of preparation both sporting and psychological was necessary for these athletes, testifying to a mental handicap and unaccustomed to live this type of big event. To overcome the pressure, athletes have benefited from many sessions with a mental coach who taught them including having a favorite object to reassure them when they are alone in competition.

From March 15 to 20, a delegation of 54 people representing Luxembourg included 37 athletes, non-disabled players and chaperones.

The Special Olympics are held every two years, once in winter and once in summer. This year, 7000 athletes were expected for the 24 disciplines represented. Luxembourg has participated since 1991 and entered 7 sports in 2019: athletics, swimming, tennis, table tennis, boccia, unified basketball and football.

It is with pride that the Luxembourg delegation left with:

The winners of the half marathon had the honor of receiving their medal by Dan Kersch, Minister of Sports in Luxembourg.

This year, ArcelorMittal in Luxembourg has chosen to directly support the table tennis team, one of the leading sports in Luxembourg. The team consisted of three athletes and a valid partner. She was accompanied by Guy Wagener and Jeanny Dom, former champion of Luxembourg, as coaches.

And the results were present! :

Special Olympics Luxembourg is the sports federation of all people with intellectual disabilities in Luxembourg. Its goal is to spread physical and sports activities among this population, through the organization of training and national and international sports events.