In the last days of 2022, the cycle and pedestrian path between Esch-sur-Alzette and Belval (Luxembourg) was inaugurated. It is part of the overall development of the national cycling network, which includes linking Esch-sur-Alzette to Luxembourg City.

The most amazing part of the course – a first of its kind in Europe – is the 1,2 km long bridge, snaking over 7,5 metres high, close to the ArcelorMittal Belval mill, the central train station and lines of trees, of respectable size and age, which could be preserved thanks to the project design.

The carbon footprint of the project was a key element for the public authorities, from the choice of the route to the materials used to make it. Thanks to XCarb® recycled and renewably produced steel, the structural steel used in the bridge has very low embodied carbon – approximately 300kg of CO2 per tonne: only scrap and renewable electricity have been used in the ArcelorMittal mills of Belval and Differdange for the production of the structural steel elements. 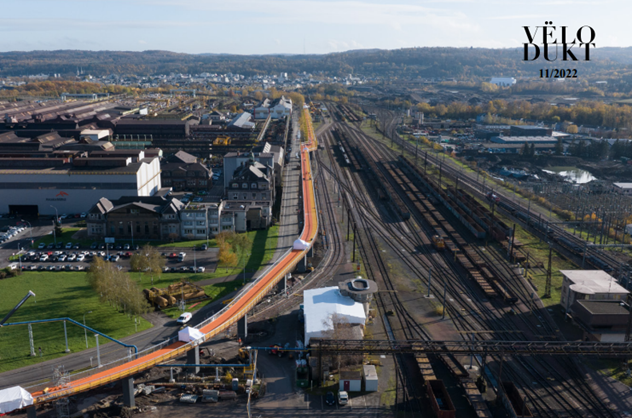 The new bridge curving its way between the ArcelorMittal plant in Belval and the railway.

The steel elements that are part of the project needed to adapt to the course of the bridge. 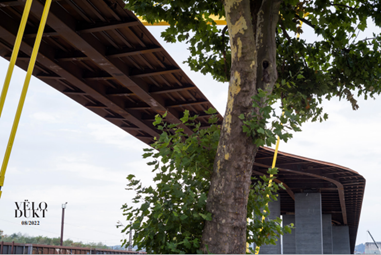 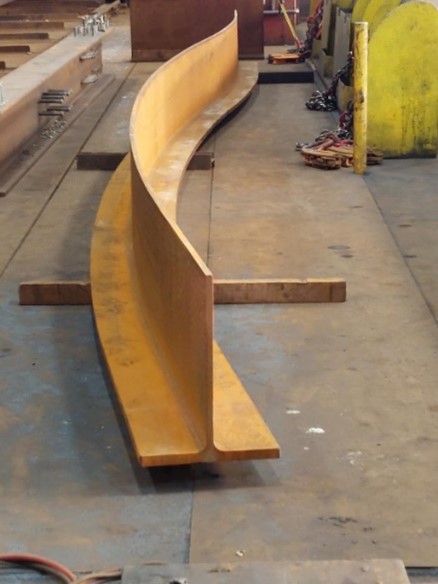 Left picture: view of the bridge from below, showing its steel structure and the curves of the path.
Right picture: one of the beams cut in T and curved in the Steligence® fabrication center to fit into the bridge

Basic elements in small sizes (IPE200 and IPE600) were used for the deck elements of the bridge. On top of these, 340 tonnes of HL1100 beams were used as longitudinal elements for the straight segments of the bridge, after being cut into T-sections at the Steligence® fabrication centre.

However, the most astonishing steel elements coming into that order are 200 tonnes of curved T-sections, tailored-made for the turning segments of the bridge. Using the hydraulic press of the Steligence® fabrication centre, two bends had to be brought to the beams, including a counter deflection. While all the T-sections were bended on the weak axis, either in S-shape or in standard circular/parabolic shapes, some of these T-sections were also cambered on the strong axis.

Arcorox® and XCarb® recycled and renewably produced: the sustainable match for a bridge that lasts

“The curved T-sections are probably the most visible part of ArcelorMittal’s work in this project. However, our expertise is not only there! Thanks to XCarb® recycled and renewably produced steel in Arcorox® weathering quality, the new cycle and pedestrian bridge is sustainable and designed to last, with ultra low life cycle costs. And that is what I am really proud of when I take a ride on the bridge with my cycling friends.

On top of XCarb® recycled and renewably produced steel, every single tonne of steel has been delivered in ArcelorMittal innovative range of Arcorox® weathering steel.

When designed with Arcorox® weathering steel together with XCarb® recycled and renewably produced, a bridge meets all cost, design and strength requirements, while achieving tomorrow’s most stringent embodied carbon and safety targets.

A bridge with Arcorox® sections is designed to last: no need for a protective coating now or in the future: maintenance is low, safety and usage remain high.

More information about the cycle and pedestrian bridge project

The bicycle and pedestrian bridge, linking Esch-sur-Alzette to Esch-Belval, is the longest one of its kind in Europe. The main segment between Esch/Alzette and Belval was completed by the end of 2022.

Ready for a virtual tour? Watch the video!

Want to know more about XCarb™?

The XCarb™ initiative, launched by ArcelorMittal in March 2021, brings together all of ArcelorMittal’s reduced-, low-, and zero-carbon products and steelmaking activities.

Scrap and renewable energy: the levers of low CO2 steel

To produce XCarb® recycled and renewably produced steel, ArcelorMittal uses up to 100% scrap and renewable electricity coming from renewable sources such as solar and wind power.

ArcelorMittal estimates that XCarb® recycled and renewably produced steel has a carbon footprint as low as 0.3 tonnes of CO2 per tonne of steel product when the metallics are 100% scrap, which is certified by a published Environmental Product Declaration (EPD).