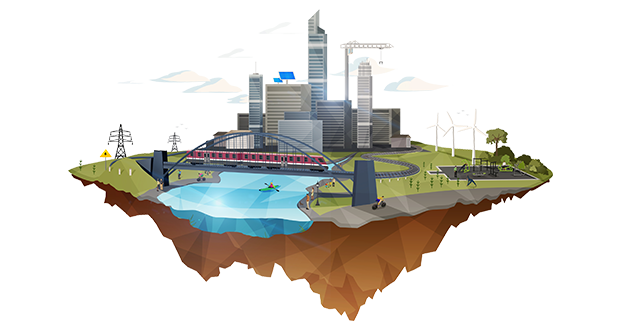 Five new grooved rails were introduced in 2016 at the Rodange plant Mill A, aimed at developing the public transport market.

Among many cities transitioning to sustainable mobility solutions, Kaohsiung, the second largest city in Taiwan, received 2,000 tonnes of grooved rails for its first tramway system.

The use of Low Carbon Vanadium (LCV) rails with the addition of very small amounts (less than 0.20%) of Vanadium, actually provides an increased grain refinement throughout the entire rail to increase hardness and elongation while reducing carbon content. Also, thanks to the higher strain and grain refinement, track hardness readings increases up to 30- 45 HBW due to wheel/rail interaction.

In addition, since rolling stock wheels are associated with lower speed and low axle weight, the actual wheels do a smooth grinding on softer steel rails, effectively helping to self-maintain embedded tracks. This is by far the best method to avoid any Rail Contact Fatigue (RCF) or head checks commonly associated with as-rolled hardened rails.

In fact, experience has shown low carbon (softer steel) rails are most suitable for city transit embedded tracks due to their low carbon content, extending the life of the rail.

Head of Mill A - ArcelorMittal Rodange