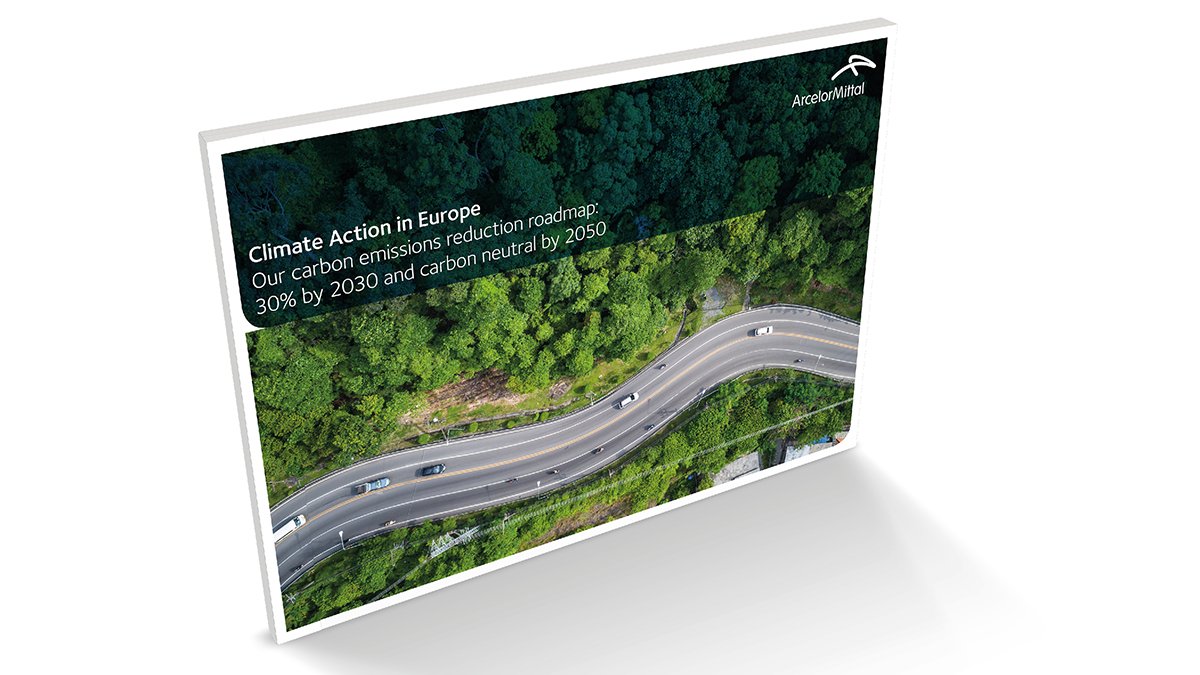 ArcelorMittal Europe sets out path to net zero by 2050, with pioneering technologies at the forefront of the company’s roadmap for carbon-neutral steelmaking

ArcelorMittal Europe sets out path to net zero by 2050, with pioneering technologies at the forefront of the company’s roadmap for carbon-neutral steelmaking

ArcelorMittal Europe has announced details of how it plans to become carbon neutral by 2050 in its first climate action report, published today. Building on the company’s work that has demonstrated that the steelmaking process can become carbon neutral, the report publishes details of the ground-breaking work underway to reduce emissions by 30% by 2030 before reaching net zero in 2050.

Smart Carbon is a carbon-neutral steelmaking route that leverages all clean energies – circular carbon, clean electricity and carbon capture and storage (CCS) - within the high temperature-controlled reduction environment of ironmaking. In its first phase, Smart Carbon will primarily use circular carbon.

Reaching carbon-neutral steelmaking via DRI involves moving from using predominantly natural gas, to hydrogen as the key reductant in ironmaking. As this hydrogen becomes ‘green’, the steelmaking process comes close to carbon neutrality.

While both the Smart Carbon route and the DRI-based route have the potential to deliver carbon -neutral steel by 2050, the important difference between the two routes is that Smart Carbon can deliver results sooner, through its use of complementary technologies which enable incremental progress.  Uniquely, Smart Carbon has the potential not only to provide carbon-neutral steel, but also carbon-neutral cement, and the building blocks to make recycled carbon materials to replace polyethylene-based plastics. Smart Carbon can also contribute to CO2 removal, through the increased use of circular carbon, using sustainable biomass and waste, combined with scaling up CCS.

By investing in both routes – and in recognition of the need to act now to combat climate change - this means ArcelorMittal Europe can significantly reduce scope 1 CO2 emissions* – which include all process emissions - by 2030 over a 2018 baseline, while waiting for the large-scale, affordable renewable energy needed for hydrogen-based steelmaking.

ArcelorMittal Europe’s 2030 target therefore combines Smart Carbon technologies and increased scrap usage, specifically by developing new ways to increase the use of low-quality scrap metal – which is hard to recycle - in the primary steel production process.

In the longer-term, both routes have the potential to leverage all three clean energies to achieve carbon neutrality, namely:

Climate change is one of the greatest challenges facing us all.  Understandably, much attention is currently focussed on navigating the unexpected and unprecedented outbreak of Covid-19.  However, climate change remains a huge long-term challenge that will require diligent attention and progress for decades to come. And like Covid-19, it is not something that one country or one company can solve alone. Carbon emissions also know no border, so it will take a global effort, with all nations and companies playing their part.

ArcelorMittal Europe is doing a lot of work to develop a path to net zero. The technologies we are working on have the potential to make a big impact. Indeed, steel should and can play a leading role in achieving the vision for Europe as outlined in the Green Deal.   Our research and development team are one of the best in the industry and relish solving complex problems. But it needs a team effort.  The support the EU and member states can give to ensure we have well-designed policy to make large-scale, competitive, carbon-neutral steelmaking a reality, is critical.

ArcelorMittal Europe has industrial-scale demonstration projects under construction for every part of its carbon-neutral roadmap. The company is building industrial-scale demonstration plants at its operations in Belgium (Carbalyst® and Torero), France (3D and IGAR in Dunkirk). In Hamburg, Germany, we are in the design and funding phase prior to the investment decision, of an industrial-scale project to use hydrogen instead of natural gas in the direct reduction of iron ore (DRI). These demonstration plants will allow the company to scale-up technologies that will be used in the Smart Carbon and DRI-based routes. The progress made has also been possible thanks to financial support from EU member states and European Union funding. ArcelorMittal Europe is now in the process of applying for funding for a further six projects.

While some of the technologies that feature in ArcelorMittal Europe’s roadmap will be ready for commercial-scale use by 2025, and by 2030 many of the Smart Carbon technologies can be mature and partially deployed across our facilities in Europe, the report also highlights the need for the right policy framework to enable European steelmaking to contribute to the EU’s climate targets, particularly given the costs involved.  In total, the estimated investment needed for ArcelorMittal Europe to fully implement Smart Carbon is €15-25bn and €30-40bn for the DRI-based route.  An additional €15–200bn would be required for the associated clean energy infrastructure (see report for more detail).

I am proud of the work that has brought us this far in our efforts to create Europe’s first and largest carbon-neutral steelmaker. Our progress would not have been possible without the many partners we have on our Smart Carbon and innovative DRI projects. Today, the biggest barrier to transitioning to carbon-neutral steel, beyond the necessary technologies reaching commercial maturity, is the absence of the right market conditions. The financial costs of realising carbon-neutral steelmaking are undeniably huge. However, with a shift in market conditions brought about by having the right policies in place, European steelmakers will be able to unlock the means to reduce emissions from steel globally, while also ensuring the European steel industry remains competitive.

The medium-term market conditions needed include:

The report also reiterates the company’s position that a Carbon Border Adjustment should be introduced in the European Union, which would ensure that EU-produced steel and imported steel tonnes in direct competition would have an equal carbon cost, creating a fair market and, crucially, encouraging investment in lower-emissions steel production.

The ArcelorMittal group will publish its 2030 target later this year.

To read the report and view a short film about our roadmap, visit https://corporate.arcelormittal.com/sustainability/climate-action-in-europe