“We Are One Family, We Are Buffalo” that is the motto of KAA Gent, Ghent’s football team, whose stadium - the Ghelamco arena - was built with ArcelorMittal’s steel. This multi-purpose stadium of 20,000 seats contains beams from Luxembourg in its roof structure and a steel deck produced in Belgium.

Steel for the roofing structure

The Ghelamco Arena is a multi-functional stadium with room for offices, warehouses, restaurants and retail shops. While its structure is made of concrete and its façade is made of glass; steel, due to its lightness, was the material of choice to build its roofing structure.

The steel canopy built over the grandstand consists of 58 steel trusses of 38 metres. Each rafter weighs about 8 tonnes and is supported by 2 concrete columns. It was built with 600 tonnes of S355 beams provided by Distribution Solutions Belgium and produced by ArcelorMittal Europe - Long Products in Differdange (heavy beams) and Belval (light beams). They were ordered by the contractor ASK Romein to Distribution Solutions Belgium. 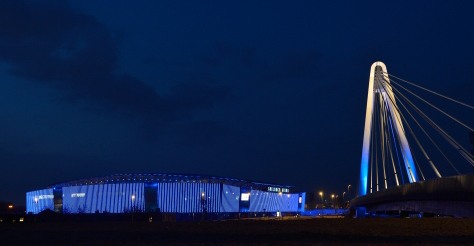 ArcelorMittal Europe – Flat Products provided steel for 237m² of sandwich panels in the color RAL 9005 25µ polyester produced by ArcelorMittal Gent. The steel roofing was supplied by Joris Ide, an important client of ArcelorMittal Gent and was placed by MSB Zelzate.