Meet the Hearst Tower. Located in the heart of Manhattan, this striking building is a unique combination of a 1920s art deco masterpiece and a new-millennium, 46-storey environmentally friendly skyscraper. And all this has been made possible thanks to ArcelorMittal steel.

New York’s first green skyscraper when built, the Hearst Tower was last year awarded a platinum LEED (leadership in energy and environmental design) rating by the US green building council, becoming the first building to receive both gold and platinum certifications.

Commissioned by publishing magnate William Randolph Hearst, the six storey art-deco building that the Hearst Tower sits on was built in 1928. The challenge the architect, English expert Norman Foster, and engineers faced was adding a skyscraper tower that allowed the art deco building to retain its character while not jarring with it either.

More than 10,000 tonnes of HISTAR® steel from our site in Differdange, Luxembourg went into the wind bracing and gravity load system of the building. Our steel is  visible in the façade, as diagonal lines over all faces of the skyscraper.

Designed as a ‘green’ building, the Hearst Tower is among the top 10% of energy-efficient buildings in the US with more than 85% of the tower made from recycled steel.  The eco-friendliness of this structure does not end there however; it sets an example through several cutting-edge attributes:
• The floor of the atrium is paved with heat conductive limestone;
• Polyethylene tubing is embedded under the floor and filled with circulating water for cooling in the summer and heating in the winter;
• Rain collected on the roof is stored in a tank in the basement for use in the cooling system, to irrigate plants and for the ‘IceFall’, a three-story cascading fountain in the glass-walled atrium.  This process annually diverts 1.7 million gallons of water from becoming runoff waste;
• Overall, the building has been designed to use 26% less energy than the minimum requirements for the city of New York;

In 2006, the Hearst Tower received a LEED gold certification, making it the first skyscraper in New York to achieve the coveted green building seal. In the same year the building received the Emporis Skyscraper Award, citing it as the best skyscraper in the world completed that year. 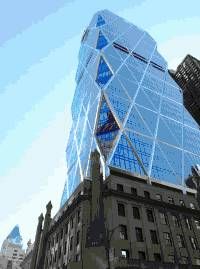 Want to find out more?

Go to http://www.constructalia.com for more details and images on the Hearst Tower.
Learn more about LEED