This achievement is a result of the collaboration between the R&D centre in Esch-sur-Alzette, the steel shop in Differdange, the rolling mill in Belval and Commercial RPS (Rails, Piles, Special sections) as well as the mills in Bremen and Duisburg in Germany.

The key advantage of this product called AMLoCor™ is a significant reduction of the corrosion rates in seawater, specifically in low water zones and permanent immersion zones. Tests in European ports as well as laboratory tests have proved that corrosion is reduced by between three and five times when using AMLoCor™, compared to a standard structural steel. 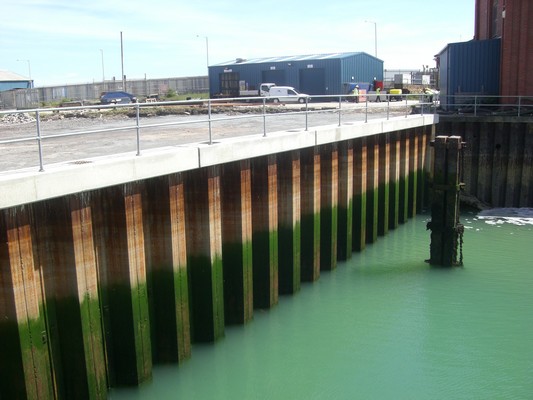 "AMLoCor™ also leads to considerable savings in steel weight compared to an unprotected standard structural steel. That is a major advantage against alternative solutions that use concrete", says Jacques Hoffmann, Head of the ArcelorMittal Research Centre in Esch.

Thus the new steel grade will allow engineers to design even more cost-effective structures that will last for 50 years and more without any additional surface protection.

Further, AMLoCor™ protects steel from accelerated low water corrosion which follows biological activity speeding up the degradation of steel in some ports. The first quay wall using AMLoCor has already been built in the Port of Shoreham, on the south coast of England. This wall is equipped with special devices developed by ArcelorMittal's Research and Development (R&D) Centre in Esch-sur-Alzette that will monitor the residual thickness of the steel wall.